Seeing that Blended just opened on the 23rd, I could not have timed this week’s review any better. I’m reviewing the soundtrack to an earlier Sandler/Barrymore romantic comedy: 50 First Dates. 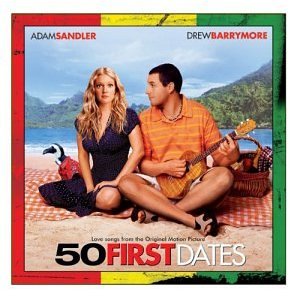 Twitter Review: Basically, the soundtrack is reggae/ska covers of new wave songs. It sounds like a great idea on a paper and it’s actually executed well too.

Things Not to Look For (cause they ain’t there):

Low Points: There aren’t really any low points. And it doesn’t have any particular high points either because it is after all just a collection of pop songs from a movie. So I’m not saying the album is a masterpiece or anything despite my above average rating. And it’s not something you would listen to while doing nothing so you can really soak in the masterful attention to the tiniest of details. But maybe you’re cleaning up the kitchen on a Saturday morning or driving to the grocery store, then by all means queue it up on your smartphone and enjoy yourself. I don’t think there’s a bad track on the entire album.

Anything Else: It looks like every cover featured on the soundtrack was specifically created for the movie. So this is the only place you’re going to find these songs. It shows they put some effort into this and didn’t try to grab a bunch of pre-existing covers. I guess part of the reason I’m so impressed with this album is I’ve listened to countless cross genre compilation albums and most of them have been utter crap. It seems to me that the modus operandi is to get one or two good bands and then find a bunch of unknowns that work cheap to fill out the rest of the album and ship it out ASAP to try to make some money off poor suckers like me. I’ve been disappointed so many times. The songs covered were well-chosen and they had quite a few well-known artists participate. I’m ecstatic that I can even write that sentence.

There are a lot of people angry that this soundtrack failed to include The Beach Boys and Israel Kamakawiwo’ole and I believe they have every right to be mad (there’s some seriously pissed off people on Amazon) because it’s a completely reasonable expectation. But the fact that they actually pulled off a reggae goes new wave album that doesn’t suck more than makes up for it from my perspective.

One thought on “Week 11 Review”