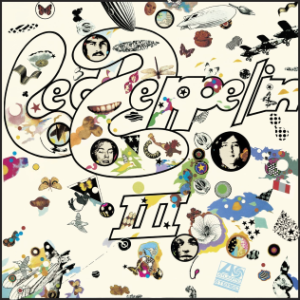 Bottom Line Up Front: This is a 5.0 out of 5 stars album. This quote sums up the awesomeness of this album perfectly:

“Hey, I believe in God, man. I’ve seen him, I’ve felt his power. He plays drums for Led Zeppelin and his name is John Bonham, baby!” -Nick Andopolis, Freaks and Geeks, Pilot Episode

Well, maybe it doesn’t, but I’ve been waiting over a year to review a Led Zeppelin album so I could use that quote. So we’re just going to roll with it. You might have noticed Freaks and Geeks references in past reviews because the show is just filled to the brim with awesome music. If you are a music enthusiast and haven’t seen the show, you are really missing out. Alright, enough about the show. Let’s get back to Zeppelin. It is a review about them after all.

Artist Background: Well, here we go again. I try to summarize an incredible band in a very limited amount of space. I swear I’m going to just start copy and pasting a link to the Wikipedia page. This is our second, and equally important, UK group for the Just a Band series. Zeppelin formed in London in 1968. The band was formed out of the ashes of The Yardbirds, as The New Yardbirds, to finish up some concert commitments the band had leftover. The name was axed quickly, as the Yardbirds moniker was only agreed upon by the former members, to use for those last couple concerts. After changing their name to Led Zeppelin, they quickly scored a contract with Atlantic sight unseen, which is pretty impressive. The band consists of Jimmy Page, Robert Plant, John Paul Jones and John Bonham. All four of these guys were incredibly influential on the rock genre for their respective roles in the band. “Among the greatest ever” is a term that gets thrown around often with these guys and with good reason. All members, except Bonham, are still alive. Unfortunately, John Bonham died in 1980 of a pulmonary edema caused by alcohol-related asphyxia. I really don’t like that description of it. It sounds like it came from a medical textbook. Led Zeppelin did not live some kind of Harvard textbook lifestyle. They lived (some say invented) the rock & roll lifestyle. They were famous for trashing hotel rooms. No, I’m sorry, trashing entire floors of the hotels they stayed at while on tour. A better fitting description of his death is he choked on his vomit after passing out from drinking 40 units of vodka. That’s how he went out. I don’t know what issues he was dealing with at the time that would cause him to drink so much, but it was an incredibly tragic lost. Zeppelin broke up after his death, but, before that time, they managed to be one of the most important rock bands ever. They are the second best selling band in the US with 111 million sales, and every album they put out reached the Billboard Top 10. Finally, every episode in season 5 of That 70’s Show is named after one of their songs. If that doesn’t show how important they were, I don’t know what does.

Album Background: First off, I just want to say people who grew up in the late 60’s/early 70’s are spoiled rotten when it comes to album releases. I touched on this earlier with the Grateful Dead releasing two incredible albums in such a short time period as being mind blowing to me. Led Zeppelin I through IV came in the very short span of 1969 to 1971. Houses of the Holy ****ing ****! We’re you people in your bedroom just swimming in a pile of amazing records ala Scrooge McDuck?

Led Zeppelin III is, obviously, their third album. It was released in 1970 and has a runtime of 43 minutes. Much of the album was composed in Wales where Plant and Page were taking a break from the strenuous touring schedule. The cottage they stayed in is named Bron-Yr-Aur, which means “golden hill” in Welsh. It’s pretty evident that the location had a great deal of influence on the band since it was included as part of the name for two of their songs. It’s no coincidence that spending a couple months in a cottage with no electricity or running water lead to an abundance of acoustic material. This drastic change in style confused both critics and the public alike, but it also earned them newfound progressive rock fans. Despite the initial mixed response, people eventually realized just how amazing and important this album was for the band and to music in general.

I just want to quickly mention the album sleeve because, at first glance, it’s a bunch of random flight-themed images on a white background. However, upon closer inspection, there exists a small disc of similar images behind it. By rotating it, you can change the layout of the front. This type of art, known as volvelle, was included in the album design by Jimmy Page and Zacron, an artist who had been working with rotating graphics for several years prior. I was actually unaware of this fact until I bought the 2014 Deluxe Remastered CD specifically for this review and turned it myself. It’s very freaking cool and definitely some of the most interesting album art I own. Here’s what the rotatable disc looks like so you don’t have to tear apart your own:

Favorite Track: There really is so freaking much to love on this album. This is a difficult decision. I will go on the record as saying that Since I’ve Been Loving You is the most impressive song on the album by far. I’ll touch on it under the What Works section of this review. It will probably be referenced multiple times given how amazing it is. However, my favorite track has to be Gallows Pole. If there was one song that routinely stuck out over the week, it was this song. It starts out soft with a simple acoustic riff and Plant singing the opening lyrics. Then, Plant turns it up a notch belting out the ever memorable, “Hangman! Hangman!” just as the mandolin kicks in. That caught my attention every single time when I was in the car. The gradual build up in this song is just amazing as the electric bass is added in shortly after.  Finally, they introduce the banjo and drums right as things just start getting crazy. Although, it’s crazy in a great way because of the gradual introduction of each part of the song. Imagine if the song started the way it sounds at about the 3:30 mark. It would be completely overwhelming. Yet, with how Zeppelin did it, it’s pure genius.

What’s interesting about this song is it’s actually based off a famous folk song, The Maid Freed from the Gallows, that is hundreds of years old and has been sung in the many regions of Europe with countless variations. Led Zeppelin wasn’t the only ones to record the song in modern times either. Most notably, Huddie “Lead Belly” Ledbetter recorded it as The Gallis Pole in the 1930s, and Bob Dylan recorded it in 1963 as Seven Curses. There are a lot of variations, even between these three versions. Regardless, the basic story is a person, often female but not always, begging for someone to buy their freedom from execution by bribing an official of the courts. Not only do circumstances change between versions, but so does the perspective from which the tale is told. Sometimes the bribe works and sometimes, like in Gallows Pole, it sadly does not. Despite the choice to go with the more sad ending, it’s still an incredible song.

In Conclusion: I would have to say if you are going to listen to the album, then sit down and listen to it. There are so many amazing things happening on this album. You might not notice that Since I’ve Been Loving You is the shortest seven and a half minute song ever recorded. The time passes so incredibly fast because it can keep your attention the entire time. I had no idea the song was that long until I looked at the playlist. You also might miss out on the craziness of the wah wah vocals for Hats Off to (Roy) Harper. Or you could completely miss that they basically restart the song over again toward the end of Bron-Y-Aur Stomp. Maybe you’ll miss any one of the numerous false endings or wonderfully syncopated rhythms found throughout the album. Why purposely deny yourself all of this awesomeness because you decided to multitask and passively listen to it instead? Led Zeppelin deserves better than that. You deserve better than that.

Music Video Links:
I couldn’t find any official music videos for the original release. You can find some live stuff recorded later if you look on YouTube.