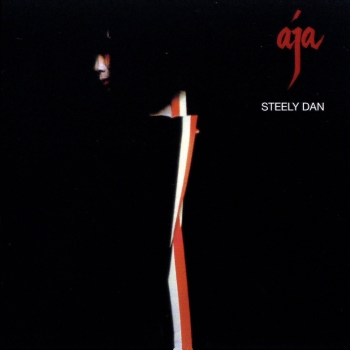 Bottom Line Up Front: This album is 5 out of 5 stars. Period. End of story. Everyone should absorb Aja into their auditory cortex and enjoy as the other areas of their brain light up like fireworks. If you do not have it in your music collection, your music collection is incomplete. It really is that simple.

Artist Background: Let’s first get this out of the way before we talk about anything else. Steely Dan is named after a dildo from William S. Burroughs‘ 1959 non-linear classic novel Naked Lunch. Now that we know that little fun fact, Steely Dan is basically Walter Becker and Donald Fagen with a collection of session musicians. Originally, the band had more members but these two guys are seriously obsessive about having the perfect sound. And it’s a lot harder to do that if you can’t swap out your musicians on a track by track basis. They even went so far as to use two completely different drum kits in a single song to get the exact sound they wanted. And you can also clearly hear every instrument they feature in their music. Examples like that put Steely Dan in high regards among many audiophiles.

Album Background: How important is this jazz rock record that runs 40 minutes over 7 tracks? So important that it was added to the Library of Congress as part of the United States National Recording Registry for 2010. Aja is the most commercially successful album from the group. It got to number 3 on the US Pop charts. That’s right. Pop charts. Aja is as much pop as it is jazz. I’m not going to list all the musicians involved because it’s a pretty long list. But I highly suggest reading the background of each of them, if you get a chance, to really get an idea of the scope of talent that was involved in the creation of the Aja. And it seems like nothing but their very best was good enough as they auditioned many musicians and even after finding the perfect person for the part, usually many takes were still required. And for those wondering about the cover, that’s a picture of Sayoko Yamaguchi who seems to be Japan’s first international supermodel.

Favorite Track: My favorite track is Deacon Blues. It’s the 3rd track on the album and is 7 minutes and 36 seconds long. I think what put this song over the top for me was the chorus. Not only are the lyrics great, but the way they are delivered is perfect. Just the right amount of backing vocals in the right spots. It also intrigues me that they wrote a song featuring a reference to a college football team, the Alabama Crimson Tide. On a side note, the Crimson Tide happen to be ranked #1 in the nation right now. Even the term “Deacon Blues” has a nice ring to it. The sax solo by Pete Christlieb in this song is also fantastic. And should be as the chorus also makes a reference to playing the saxophone. It’s hard to describe this song as anything other than perfection.

I’m not even including a What Doesn’t section. That would be an insult.

In Conclusion: Go listen to this album right now if you’ve never heard it before. Keep in mind, Spotify has an ad-backed free option now. So take advantage. Why are you still reading this? Go! Now!